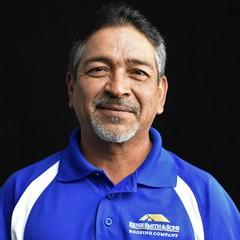 Emilio began his 29+ years in the roofing industry shortly after a brief stint at HEB as a cashier. Starting off in flat commercial roofing as a worker, he quickly became a kettleman, operating the machines that melt asphalt into a 500 degree boiling pot, ready to be applied to the new roof’s underlayment.

From there Emilio became second-in-command on the crew, and soon took on the responsibilities of a foreman. He is our head superintendent now, in charge of managing multiple crews, jobs, and other superintendents at once.

Emilio is happiest at home with his wonderful wife and children, barbequing fresh steaks and juicy beef ribs and watching his Dallas Cowboys or the Houston Texans. He’s an avid angler, specializing in speckled trout.

Customer Reviews
About Me

By Beverly P. from Porter, TX
"Reputation and honored Veterans, attention to detail and..."

By Stephen W. from Galveston, TX

By Brian G. from LaMarque, TX

By Richard I. from Santa Fe, TX

By DeWayne W. from Rosharon, TX